You're My Everything - Les Brown 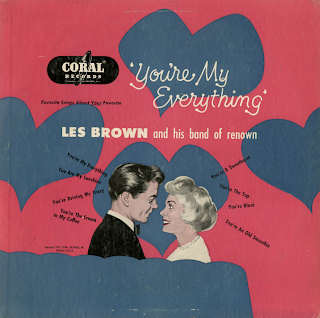 Available from online vendors so I will not be posting a sample. Presented here to share the cover and bio information.

From the back cover: Born in Reinerton, Pennsylvania, March 14, 1912, Les Brown was nurtured on music from the start. His father, a baker, was a music-lover and saw to it that Les began taking piano lessons when the boy was eight. Unfortunately, not much progress was made on the keyboard. Then one day Les watched his father and three uncles play an amateur sax quartet. Les got hold of his Dad's curved soprano sax and suddenly showed real interest in music. That interest never cooled. Through his high school years Les studies and practiced and, by the time he entered the Conservatory of Music in Ithaca, New York, in 1926, he was way ahead of the other students who played sax. Here Les got his first real taste of harmony, arranging, composing, and other technical subjects which proved so valuable to him. From Ithaca he went to Cornwall, New York, as a student at the New York Military Academy. Then came Duke University.

While a student at Duke, Les and an enthusiastic group of collegians determined to make their mark in the music world by forming a band, Les played sax and started arranging for the newly formed group. It was this combination which he took North in 1936 to play at Budd Lake in New Jersey, for the summer. The band was tagged the "Blue Devils" and under the moniker made some records. Things didn't go too well for the group, and the "Blue Devils" broke up in September 1937.

Les became a much sought-after arranger. He did some outstanding arrangements for many of the top bands of the day and for music publishers. Although he was doing well financially, he still yearned to wave the baton again. So, in the summer of 1938, he formed a new band. The boys had a tough time for a while, but the turning point came when they were booked into Mike Todd's Theatre-Cafe in Chicago for four weeks. The band did so well that they were held over for four months. Then came the Log Cabin in Armonk, New York, and the Blackhawk in Chicago, the Palladium in Los Angeles, the Astor Roof in New York, and the Meadowbrook in Cedar Grove, New Jersey. Each stay extended for beyond an accepted name in the music business – a name that was synonymous with fine music.

Les also stepped out as a major songwriter with "Sentimental Journey." Featured on the Bob Hope radio program, Les achieved national fame – a position which he continues to hold.

From Billboard - March 1, 1952: Like his first "Over The Rainbow" album for Coral, this package is built on a central theme – the anonymous "you". Tunes are all of a tried and true type and they are played wonderfully well by the crack Brown crew. Excellent dance music for those who prefer their terping set to a swinging beat. Wherever the "Rainbow" set had meaning, this one is bound to accumulate sales. The "you" theme allows for all types of merchandising gimmicks, too.

You're My Everything
You Are My Sunshine
You're Driving Me Crazy
You're The Cream In My Coffee
You're A Sweetheart
You're The Top
You're Blasé
You're An Old Smoothie
Posted by By Mark Betcher at 3:21 AM