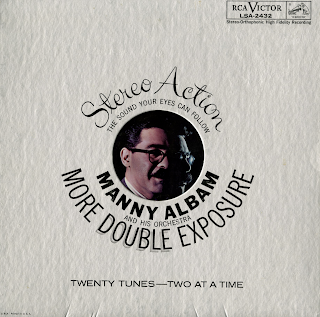 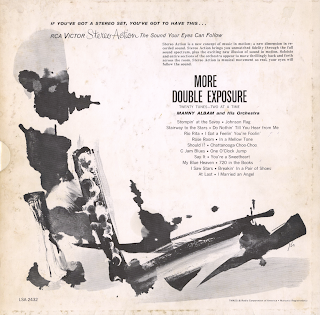 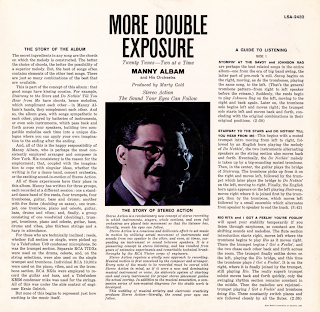 From Billboard - December 4, 1961: An inventive program for the super stereo buff. Arranger Manny Albam has selected a flock of tunes with more of less the same basic chord construction and arranged them in pairs. For instance "Stompin' At The Savoy," goes together with "Johnson Rag," and "Rio Rita" is coupled with "I Got A Feelin' You're Fooling'." The tunes complement each other handsomely and Albam's scoring for horns, strings and winds is the dressing on the tasty salad. A fine addition to the Stereo Action series

The jacket features a circular die-cut which reveals Albam's head as printed on the glossy sleeve.

Stompin' At The Savoy and Johnson Rag
Stairway To The Stars and Do Nothin' Till You Hear From Me
Rio Rita and I Got A Feelin' You're Foolin'
Rose Room and In A Mellow Tone
Should I? and Chattanooga Choo-Choo
C Jam Blues and One O'Clock Jump
Say It and You're A Sweetheart
My Blue Heaven and 720 In The Books
I Saw Stars and Breakin' In A Pair Of Shoes
At Last and I Married An Angel
Posted by By Mark Betcher at 6:21 AM