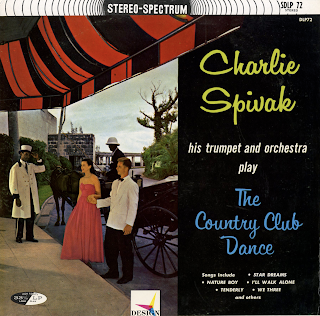 The engineering could have been worked out better. The sound is a bit flat, but could be excusable for an early stereo pressing, especially for a Design product. The arrangements, however, are excellent and the musicianship is top-notch.

From the back cover (seems like the copy needed editing... but here it is, presented word-for-word): Charlie was born in New Haven, Connecticut, twelve miles from Derby which is my home town. I speak of personal knowledge when I say that he is one of Elitown's best beloved sons... and certainly one of its best known. Unlike that other New Englander, Al Donahue, who went on to study law, Charlie's family wanted him to be a doctor. Could be it's because Harvard is best known for its law school, while Yale has one of the best medical schools in the nation. Charlie played with the early and great Benny Pollack band which was the cradle of many of today's very top musicians. From there he went on to the Dorsey Brothers great organization and his great trumpet can still be heard with that band on Designs' Collector Series Album DLP 20, recently hailed as the finest work of its kind with the original Dorsey Brothers Band. Other members of that group included Glenn Miller, Skeets Herfet and Bob Crosby. He left the band with Glenn Miller to join Ray Noble and his orchestra. After a stint of solo work Charlie started his own band at the "cradle of great band" Glenn Island Casino. He followed the Casino with a record breaking engagement at New York's swank Cafe Rouge where he promptly broke Glenn Miller's record. One of the few "big bands" to carry on through the period where the big band faded from the American scene. Charlie is still playing danceable music for millions of the nation's smarter goer-outers.