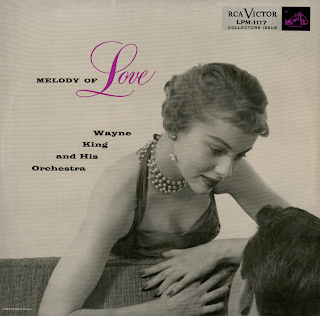 Available from online vendors so I will not be posting a sample. Presented here to share the cover art and bio info from the back cover.

From the back cover: Born in Savanna, Ill., Wayne King started his career in music as a clarinetist, playing dance engagements in and around Savanna in his high school years.

King came to Chicago in 1921, playing with various orchestra. He later played with and became assistant conductor of the Tivoli Theatre Orchestra. In 1927 he became leader of his own orchestra, and played at the Aragon Ballroom in Chicago until 1935.

He entered the Army in 1942 and was discharged in 1944, with the rank of Major. Among the many hits he has written are "The Waltz You Saved For Me," "Josephine," "Goofus," Waltz Night In Heaven" and "Lullaby For Latins."

From Billboard - June 4, 1955: Billy Vaughn sparked a revival for Wayne King-type waxing this year with his "Melody Of Love" disk, so what could be more natural sales wise, than for RCA Victor to reissue this collector's package of old King sides, including the title tune? The dreamy romantic quality is strongly in evidence, but the mood may be marred for some by the fact that most of the selections are accompanied by sentimental narrations by Franklin MacCormack, and vocals by King himself and Linda Barrie. In addition to the title tune, songs include "Because You Love Me," "Amour," "The Dany Is Done," and "None But The Lonely Heart." A strikingly beautiful girl adorns the cover.

Because You Love Me
I'm Getting Might Lonesome For You
Melody Of Love
I Love You Truly
Lonesome That's All
Josephine
None But The Lonely Heart
Amour
Just A Dream Of You, Dear
The Lamp Of Memory
Don't Tell A Lie About Me, Dear
The Day Is Done
Posted by By Mark Betcher at 4:51 PM