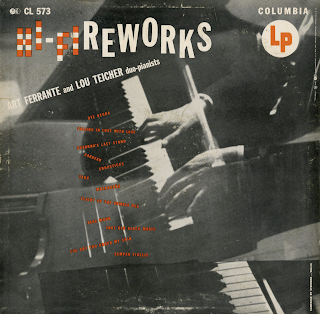 From the back cover: Although it might be felt that Ferrante and Teicher harbor some dark grudge against the piano for not being able to sound like a full orchestra, they are in fact devoted to the instrument and both are virtuosi at the keyboard. Although this collection is devoted to their knock-about approach, they have also recorded works in a charming and lyrical vein, notably their meddles of music from Can Can and Me and Juliet and a musical salute to Europe in Continental Holiday, and are well-known as serious concert artists. They met when both were students at New York's Juilliard School of Music, when they were six years old. Both were prodigies and were two of the youngest students ever accepted by that august institution. Almost from the beginning, they began playing together and eventually combined their efforts to work together under ensemble teachers.

After graduation, they made a brief concert tour together, and then returned to Juilliard as members of the faculty, where they combined teaching with a modified concert schedule. In 1947, they began a series of cross-country tours presenting programs that ranged from pre-Bach composers up to and including present-day popular masters. So successful were these programs that the following year they were booked for 139 concerts, and since that time they have become one of the most popular piano duos in the country. Appearances with the Philharmonic-Symphony, the Detroit Symphony and many others followed, and they have been heard on many radio programs, including Piano Playhouse and Percy Faith's program.

Oye Negra
Falling In Love With You
Susanna's Last Stand
Caravan
Blue Moon
Semper Fidelis
Chopsticks
Tabu
The Old Black Magic
I've Got You Under My Skin
Malaguena
Flight Of The Bumble Bee
Posted by By Mark Betcher at 5:32 PM