Kiss Of Fire - The Exotica Sounds of de los Rios 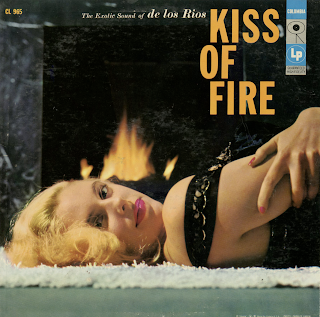 Available from online vendors, so I will not be posting a sample. Presented here to share the original cover and liner note excerpts.

Rios moved to Spain in 1962 and committed suicide in 1977, a victim of acute depression.

This is a terrific Latin flavored mood/exotica set that features some "experimental" percussion and screeching strings.

Just when you think Rios' arranging style will fall back on typical period mood, he throws in some interesting sound or a surprise instrument to perk your interest.

From the back cover: In Argentina – and in the United States too – the name de los Rios is a hope for the future. At an age when most artists are only beginning to make their talents known, Waldo de los Rios has already attained international recognition as an artist, as a composer, as a conductor and as an arranger.

He was born in Buenos Aires on September 7, 1934. His choice of music as a career was influenced by his mother, the well-known folk singer, Martha de los Rios. He began his studies at seven and in due time was graduated from the National Conservatory of Music and Scenic Art with a degree of Professor in Music. His professional career began at thirteen, when he played the piano as accompanist to his mother, along with a band composed of guitars and instruments typical of Argentine folk music. He also toured with his mother, and developed a genuine and lasting interest in the music of the countries he visited.

The turning point in his career occurred when his mother asked him to make special orchestrations for some music she was planning to record. The resulting arrangements were so brilliant that he was signed by the directors of Columbia Argentina who, in turn, brought him to the attention of Columbia Records. His initial records in Argentina were enormously successful and helped to rekindle a national interest in the musical heritage. For this program, de los Rios has chosen a fascinating group of South American melodies, and arranged them for a dazzling array of instruments largely unknown to North America, in addition to using the resources of a regular orchestra. The songs are from the Argentine, Paraguay, Chile and Peru, and lose none of their natural flavor in de los Rios' imaginative settings.