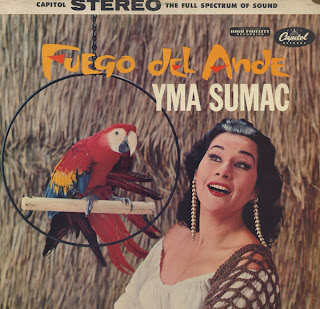 This album was recorded twice, mono and stereo. This is the stereo release. Apparently the mono release is difficult to find. However the CD available online was mistakenly mastered from the monophonic release.

Well, there's tons of more insightful material to read online then here in the dusty Atomic Attic. I posted the cover here just because I love her work so much I just have to promote Sumac when I find a new album.

Much of the album sounds remarkably more like it was recorded in the early 60s. The sound seem a bit ahead of it's time. Dale Que Dale, a track on the A side features some pretty hip guitar work and is so very cool. But you can hardly go wrong with the more "traditional" folk tracks. Sumac does it all so very uniquely.


I would love it if someone like Sumac would walk into an American Idol try-out and blow today's music lovers out of their socks.

Below is a clipping I found tape to the record sleeve. Now I know Yma is pronounced E-ma! 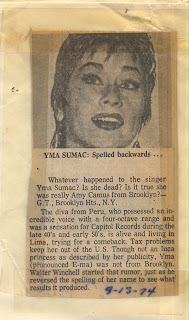