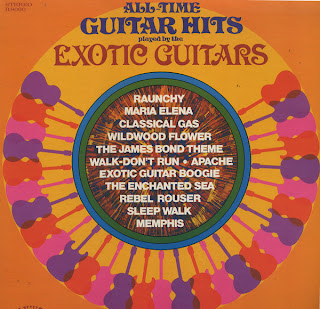 Ranwood produced at least seven Exotic Guitars albums including this one.

I don't know if this album is a compilation album or fresh material. From what I can tell there are three CDs with Exotic Guitar tunes on them floating around out there. Those CDs include two or three tracks that are found on this album. I think those CDs feature cherry picked tracks as well. There are a number of great tunes on this album and other Exotic Guitar albums that you can only enjoy on vinyl. You also get the original cover art with vinyl.
Posted by By Mark Betcher at 6:36 AM