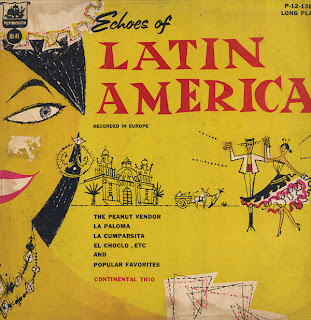 Obscure album released on the one of the most budget labels I've ever come across, Plymouth. However Plymouth did feature graphically appealing album jackets. This LP was probably a mid-50s pressing. Surprisingly, Plymouth listed the group's name, but Lord knows who made up The Continental Trio.

There are no tracks on this album. I've seen this before on budget records, maybe it was Plymouth. The songs butt right up against one another as if the group played through a recording session without a break.

As you can tell from the sample, the music is very much like you were sitting in a lounge listening to some guys playing away as if they were waiting for their next break. Very uninspiring.

But the fun doesn't end there. Why on the cover does Plymouth bill a Latin album as being "Recorded In Europe"? Who knows. Plymouth didn't even have enough "Latin" music to fill an entire LP. They padded out the album with canned classical music on side two. I can't even imagine what a record buyer must have thought when they put this gem on their turn table.
Posted by By Mark Betcher at 12:55 PM