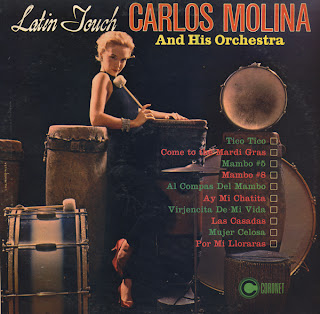 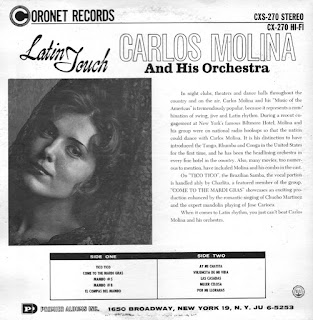 Somewhat obscure Latin album featuring Carlos Molina who, from the back cover, was engaged at New York's famous Biltmore Hotel. The jacket notes also go on to say that Molina, through radio, had the "distinction to have introduced the Tango, Rhumba and Conga in the United States for the first time, and he has been the headlining orchestra in every fine hotel in the country."

It is difficult to find any information on Molina. If he introduced all these forms to the American audience he did it long before this album was released. Coronet repackage this material from other Molina recordings including enough material to fill side "A" leaving side "B" filled with off-the-shelf traditional South American tracks. Also see Mambo Jumbo.

The vocals on Tico-Tico are credited to Charlita.