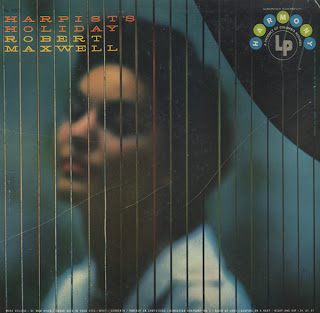 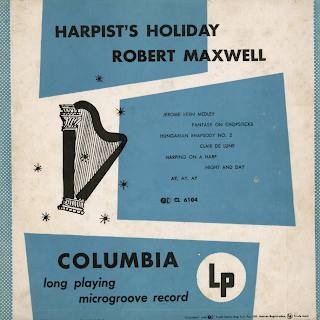 Robert Maxwell was known to use the harp more as a percussion instrument, an innovative approach. This Maxwell re-release HL 7007), features eye-catching cover art. The set is soft sounding and a good "mood" LP for 1957 and ahead of it's time when originally released in 1947.

From the back cover (CL 6104): Maxwell began playing the harp almost on impulse. As a result of a musical aptitude test, he was awarded a scholarship at the Juilliard School of Music, with a choice of instruments. He selected the harp, and after six years of hard work obtained his first job as a professional harpist. After a short time with local orchestras, he appeared with the National Symphony at Carnegie Hall and later appeared in recitals and with many great symphonic organizations. When war broke out, Maxwell joined the Coast Guard and it was then that his career really got under way.

While touring the South Pacific with a service band, Maxwell was heard by Rudy Vallee, who encouraged him to arrange and play solos with the band as background. His solos met with immediate and outstanding acclaim, and he made many of his popular arrangements at this time. His success continued after his discharge and he has since appeared in many of the country's most famous night clubs and as guest artist on scores of radio programs. Writing his own arrangements, he drew fully upon the potentialities of his instrument, and endowed it with a warmth and humor missing since the days of the late Caspar Reardon and the fantasies of Harpo Marx.

From Billboard - December 13, 1947 (C-149 review): Robert Maxwell's harp plucking make for a novel and interesting musical package. Going the gamut from the boogied "Harping on a Harp" to the strictly interpreted classic selections, Maxwell displays technique and imagination that has been lacking among harpists since the death of Casper Reardon. The package should do best in class shops but lacks universal interest.

From Billboard - March 13, 1950: An enchanting and varied program of harp solos in the popular idiom has been transferred from regular shellac to long-play to make up an entirely delightful item for relaxing listening. At the same time, it serves to preserve the tremendous virtuosity of Robert Maxwell, whose work is the contemporary equivalent of the late Casper Reardon's. But the limited popularity of the instrument will confine the sale of this platter to class locations for the greater part.