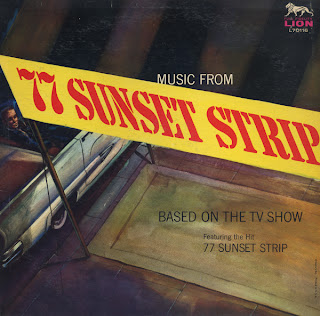 
From the back cover: About Arron Bell – One of America's top jazz specialists on bass and the veteran of such great combos as those of Teddy Wilson, Andy Kirk and Lester Young, Aaron is a familiar attraction at jazz spots like The Embers and The Left Bank in New York City. With his own group, he recently captivated audiences at the famous Concord Hotel, Kiamesha Lake, NY, for a record run of eighteen months. His credits include an appearance on Broadway in the stage version of Compulsion. He'll soon be featured on a TV series. The musicians Aaron has chosen to appear with him in this recording rank among the country's finest jazzmen – Seldon Powell, flute and tenor sax; Ray Bryant, piano; Kenny Burrell, guitar; Eddie Costa, vibes; and Oliver Jackson, Jr. Drums.

From Billboard - April 27, 1959: The low-price label could have another hot seller as a follow-up to its "Peter Gunn" LP which also features the Aaron Bell Ork. This set contains the well-known theme from the TV show, played in jazz style, in blues fashion and with a vocal as well as other songs from "77 Sunset Strip" including "Stu Bailey's Blues" and "Caper at the Coffee House." It's timely and should grab a lot of sales on the racks both stereophonically and monaurally.