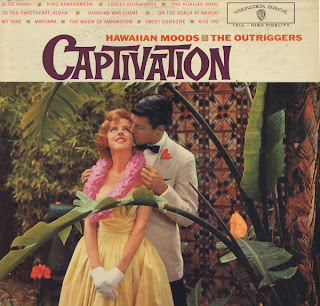 Here's a lovely cover that was apparently not shot in Hawaii, but rather at The Traders in Beverly Hills.

The August 10, 1959 Billboard like this release. "Much competition in the field, but excellent sound and newness here."

This is traditional "Hawaii" with modern (1959) pop flourishes. The most notable sound is the organ featured in many of the songs. I found several "Outrigger" albums online, but no information on the group itself.
Posted by By Mark Betcher at 8:44 PM