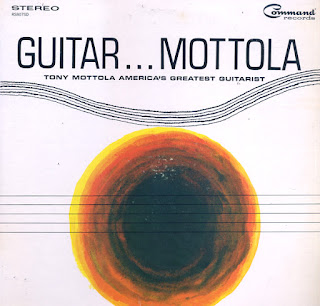 Apparently this is a re-release of another title from the Command library: Mr. Big (1959). This album features different cover design by the creative Charles E. Murphy, the designer who created so many of the graphically appealing early 60s Command covers. Curiously the back jacket informs the buyer to check for details (album production information) inside of the "double album jacket". However, this is a single, not a book-fold jacket.

The engineering, as usual, is amazing as is the stereo processing. Mottola plays over himself from one channel to the next.

Danger
Carioca
What's New
Dancing On The Ceiling
I Didn't Know What Time It Was
Carnival Time
The Song Is You
Spring Is Here
Humorescapade
Prelude To A Kiss
Am I Blue
Coquette
Posted by By Mark Betcher at 9:48 PM