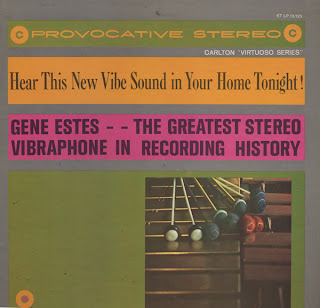 A November 14, 1960 Billboard article announces Carlton's plans for new "Virtusos" album series. "...which will feature performances by seldom heard and new artists in the pop and jazz fields.

From the back cover: "He enjoys a "musicians' musician" reputation as a leading virtuoso of the vibraphone although with less publicity than the Lionel Hamptons or Red Norvos... or among the modern set, Milt Jackson.

Estes did studio work on The Monkees (theme), Beach Boys (Pet Sounds) and Frank Zappa (Lumpy Gravy). He was 29 years old when this album was pressed.

Here's the only page of real info that I could find on Estes.

Carlton's engineering is quite good on this record.
Posted by By Mark Betcher at 10:04 PM