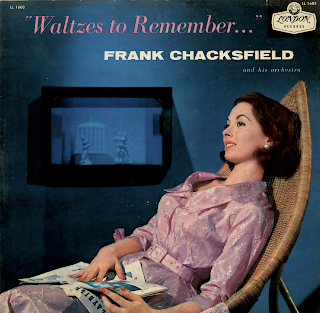 From the back cover: He (Chacksfield) was born in Battle, Sussex, and studied music from the age of seven. First he played the piano, then the organ, passing the Trinity College exams and appearing as a soloist at Hastings Music Festival before he was fourteen. At the age of fifteen he formed his own dance band, but his parents were against his embarking on a musical career and he started working in a solicitor's office.

All day Frank worked in Law, at night he studied music. Slowly he grew convinced that music was to be his career. War broke out and in 1940 he joined the Army. After being transferred to the Southern Command Entertainments Section at Salibury, he became staff arranger to the War Office shows, "Star in Battledress," and shared an office with Charlie Chester, both being demoted on the same day. This led to a job with "Stand Easy" at Blackpool, with Frank conducting the orchestra. Later he became composer, arranger and conductor for various well-known B.B.C. shows. He made his first record in 1948, and has directed the accompaniment for a number of the leading singers of radio and records. Amongst many other very fine recordings, his version of Limelight made for Londo in April 1953, became a best-seller. The Chacksfield Orchestra began to appear regularly on T.V. in August 1954, was the forerunner of many more successful shows... and so the success story continues.

From Billboard - October 28, 1957: The set is not unlike a previous waltz entry by Mantovani. It's full of the shimmering strings effects and the recording job is clean and bright. Selection consists of entirely of evergreens like "Alice Blue Gown," "Symphony," "The Desert Song," etc.

The Desert Song
The Pink Lady Walt
Sympathy
Alice Blue Gown
The Girl That I Marry
Sweethearts
Kiss Me Again
The Count Of Luxembourg
Deep In My Heart, Dear
Out Of My Dreams
Will You Remember
I Love You So
My Hero
Posted by By Mark Betcher at 4:11 PM