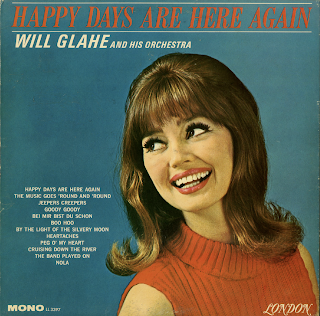 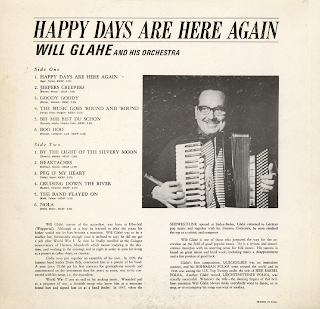 From the back cover: Will Glahe, master of the accordion, was born at Elberfeld (Wuppertal). Although as a boy he learned how to play the piano his father would not let him become a musician. Will Glahe was to be a teacher but, fortunately enough (one is inclined to say), he did not get a job after World War I. So then he finally enrolled at the Cologne conservatory of Herman Abendroth which meant studying in the daytime, and working in the evenings and at night in order to earn his living as a pianist at coffee shops, or cinemas.

Glahe soon put together an ensemble of his own. In 1929, the famous band leader Dajos Bela, contracted him as a pianist of this band. A year later, Glahe got his first contract for gramophone records and concentrated on the instrument that for years to come, was to be connected with his name, i.e., the accordion.

World War II put an end to his making music. Wounded and a prisoner of war, a Scottish group who knew him as a musician found him and signed him on as a band leader. In 1947, when the SUDWESTFUNK opened at Baden-Baden, Glahe returned to German pop music and together with his Musette Orchestra, he soon reached the top as a soloist and composer.

Happy Days Are Here Again
Jeepers Creepers
Goody Goody
The Music Goes 'Round and 'Round
Bei Mir Bist Du Schon
Boo Hoo
By The Light Of The Slivery Moon
Heartaches
Peg O' My Heart
Cruising Down The River
The Band Played On
Nola
Posted by By Mark Betcher at 3:31 PM