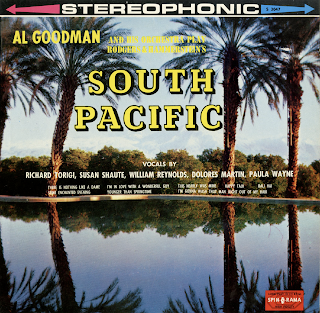 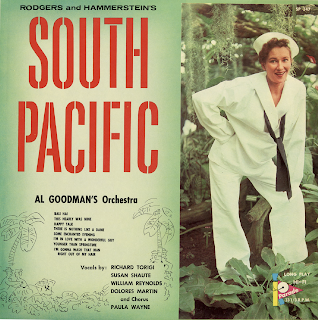 From the back cover of Parade SP - 347: Richard Torigi, featured vocalist on this album was born Santo Torrtorigi in the Bay Ridge section of Brooklyn N. Y.

Mr. Torigi has been singing professionally since he was 16 years old. World War II, however, interrupted his career for four years. He saw combat as a radar flying officer in the South Pacific.

Returning home, he joined the New York Opera Company in 1950, singing with them for five years. He also performed with distinction as a member of the Wagner and San Carlo Opera Companies.

Many of the leading opera troupes, groups and repertories have featured him. He has appeared with various companies in New Orleans, Chicago, San Francisco, Pittsburgh and Cincinnati. His most recent Broadway appearance was the lead in "The Most Happy Fella."

When not employed in singing roles, Mr. Torigi finds a creative outlet is his sculpturing.

Overture
Some Enchanted Evening
There's Nothing Like A Dame
Bali Ha'i
I'm In Love With A Wonderful Guy
Entre' Acte
Younger Than Springtime
I'm Gonna Wash That Man Right Out Of My Hair
This Nearly Was Mine
Happy Talk
Finale
Posted by By Mark Betcher at 4:45 PM