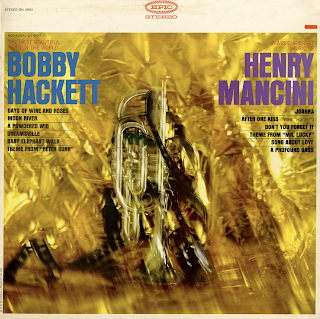 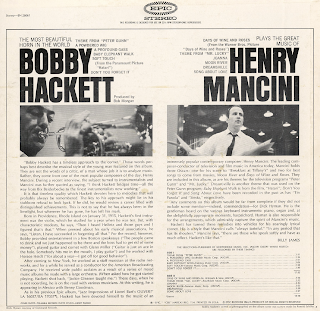 From the back cover: Born in Providence, Rhode Island on January 31, 1915, Hackett's first instrument was the violin, which he studied for a year when he was ten. But, with characteristic modesty, he says, "Then I heard Heifetz and those guys and I figured that's that." When pressed about his early musical associations, he says, "Listen, I have succeeded in forgetting all that." For the record, however, Bobby provided entertainment in a few Boston speakeasys ("The people came to drink and we just happened to be there and the boss had to get rid of some money"), played guitar and cornet with Glenn Miller ("Guitar is just an ace in the hole. Somebody hits me in the mouth, I play guitar") and he worked with Horace Heidt ("for about a year – I got off for good behavior").

After coming to New York, he worked as a staff musician at the radio networks, and for a while he served as a conductor for the American Broadcasting Company. He received wide public acclaim as a result of a series of mood music albums he made with a large orchestra. (When asked how he got started playing, Hackett shot back, "Jackie Gleason taught me.") These day, when he is not recording, he is on the road with various musicians. At this writing, he is appearing in Mexico with Benny Goodman.