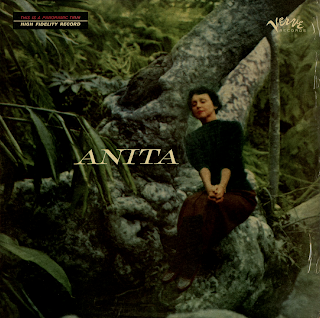 From the back cover: Through the years, from the time when she was emerging from Chicago's Schurz High School and singing with Stan Kenton and Gene Krupa and turning out such best-selling records as "Her Tears Flowed Line Wine," Miss O'Day has had an enviable reputation as a singer with a beat. This affinity for the beat, along with a highly individual manner of phrasing and the pleasantly unexpected accents and pauses, is put to good use, to begin with, on one of the finest songs Cole Porter ever turned out – "You're The Top," from the Broadway hit, "Anything Goes." For all his facile genius as a lyricist, Porter may be surprised, though – and you will be delighted – by the second chorus in which Anita supplies her own up-to-date but nonetheless appropriate words.

Also from the back cover: For this (A word about the strings: they are, fortunately, divorced from the current trend towards sticky over-lushness and are used subtly, tenderly and with artful simplicity throughout.), you can credit Buddy Bregman (like Anita a native of Chicago), who arranged the music and conducted the orchestra for these sessions in January, 1956. Bregman's name is familiar to record buyers. Following his studies at Chicago Musical College and UCLA, Bregman has been an arranger for most of the top singers in the business, including Tony Martin, Dinah Shore, Dean Martin and Ethel Merman, and for such television programs as the NBC "Comedy Hour" and the Johnny Carson show on CBS.

You're The Top
Honeysuckle Rose
A Nightingale Sang In Berkeley Square
Who Cares?
I Can't Get Started
Fine And Dandy
As Lone As I Live
No Moon At All
Time After Time
I'll See You In My Dreams
I Fal In Love Too Easily
Beautiful Love
Posted by By Mark Betcher at 4:05 PM