Encounter: The Swingle Singers Perform With The Modern Jazz Quartet 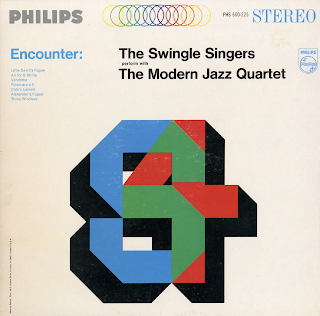 From the back cover: "The Swingle Singers interpret baroque music in a modern style, while the Modern Jazz Quartet uses baroque concepts to interpret modern compositions," say John Lewis of the M.J.Q. and Ward Swingle, leader of the Swingle Singers. Thus it was inevitable that the meeting of the two ensembles would produce a profound and mutual admiration. It is symbolically significant that the first meeting one evening in 1964, at the conclusion of an M.J.Q. concert at the Theatre des Champs Elysees. Almost immediately Lewis and Swingle arrived at the same thought: "We must do something together." Though varied commitments kept oceans between them, a cordial correspondence began, laying the foundation for future collaboration.

I December, 1965, the two groups managed a first rehearsal in New York, using a score John Lewis had composed for the occasion. Things went even better than they'd hoped. Finally in September, 1966, the M.J.Q. and the Swingle Singers set aside time to make the present album, using compositions and arrangements John Lewis had been preparing for two years.

Aside from the remarkable musicianship possessed by these artists, the most striking thing about the six sessions require to complete this album, recorded displayed, making it possible to complete the album even more quickly than had been expected. "We'd catch the very serious Connie Kay smiling at the mischievous, give-and-take tricks played by Milt Jackson and Christiane Legrand," agree John Lewis and Ward Swingle. – John Lewis and Ward Swingle as told to Morgan Arnes

From Billboard - March 11, 1967: A dazzling display of the techniques of two of the most popular jazz groups around. The vocal styling of the Swingle Singers blend perfectly with the instrumentalists of the MJQ. John Lewis' arrangements sparkle in baroque and original compositions like "Alexander's Fugue," which is performed brilliantly.