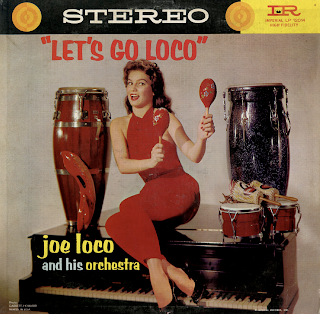 From the back cover: Since has been the case with Latin-American music, especially in the hands of its leading exponent, Joe Loco, who was the first man to introduce both the mambo and cha cha cha to this country. His mambo treatment of "Tenderly," the first mambo record ever released in 1951, was not only one of the biggest selling records of the day (and is still selling), but was a forerunner to adapting Latin rhythms to American pop tunes. Along with the Latin and pop tunes, Loco added another most important ingredient – jazz. This gave his music that extra bit of seasoning that made it distinctive and universally accepted. It appealed to the jazz buff, the melody lover, and the dancer. Two years later, in 1953, when Loco introduced cha cha cha, he handled it the same way for the same mass appeal.

Joe Loco is one of the most talented and versatile musicians in the business. He is a graduate of Juilliard and plays every instrument in the band. He is a fluent writer and excellent arranger. Following four years at Juilliard, Loco took post-graduate work at New York University and then studied the complicated Schilinger system of music under Richard Bender. He was playing piano professionally at sixteen years of age and before that was a hoofer. At seventeen he was playing trombone with Count Basie's band when Basie brought his first band to New York from Kansas City. He has played with dozens of the biggest bands, including Will Bradley, Joe Reisman, and Xavier Cugat, to name a few.

From Billboard - April 20, 1959: Here's an album that should appeal to all dancers of Latin rhythms, with the music dished out by one of the top Latin bands, the Joe Loco crew. On this well-recorded stereo set, the Loco crew comes thru with rhythmic versions of "From This Moment On," Nightmare," and "Tangerine."

Moderna Muchacha
Regalame Esta Noche
Shakin'
Julie Is Her Hame
Madness
From This Moment On
Nightmare
Tangerine
September Song
Take Me In Your Arms
Summertime
Gypsy In My Soul
Posted by By Mark Betcher at 4:39 PM