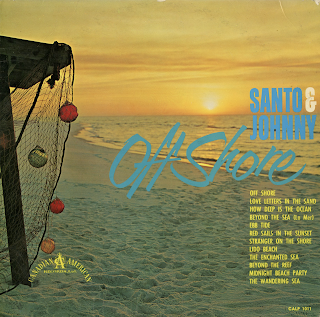 From the back cover: This entire album was recorded on the new experimental tape (Number LR 1278) – Working Number 201.), manufactured by the 3M Company. The inherent noise on this tape is 6 d.b. lower than any tape previously used. This insures top quality performance without annoying tape hiss.

From Billboard - August 3, 1963: This is one of the best Santo and Johnny albums in some time and it has a chance to turn into a strong seller. It features the duo in warm and tender arrangements of songs of the sea, aided by smooth arrangements, spotlighting a big band under the baton of Mort Garson. Best tracks include the title song, plus "Stranger On The Shore," "Red Sails In The Sunset" and "Beyond The Sea."

Off Shore
Stranger On The Shore
Ebb Tide
Lido Beach
The Enchanted Sea
How Deep Is The Ocean
Beyond The Sea
Red Sails In The Sunset
Midnight Beach Party
Love Letters In The Sand
The Wandering Sea
Beyond The Reef
Posted by By Mark Betcher at 7:12 PM