Lov And All That Jazz - Eric Kloss 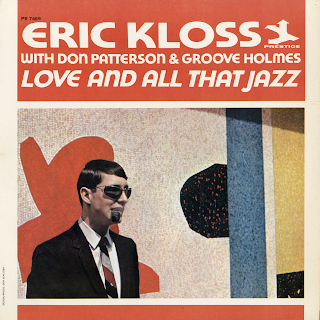 From the back cover: Love And All That Jazz marks the second appearance of Eric Kloss on the Prestige label, and it is probably that the new album will be fully as successful as the earlier one (Introducing Eric Kloss. Prestige 7442). The young saxophonist again displays a frequently dazzling technique, a marked degree of musical inventiveness, and an astonishingly mature sense of structural discipline.

Eric is backed by the organ trios of Don Patterson and Richard "Groove" Holmes. Both combos, functioning with swinging precision, provide Kloss with bedrock support which is always invigorating, and frequently exciting.

Patterson, one of the best of the younger jazz organists, employs a modern concept which loses nothing of the essential funkiness and drive which characterizes the jazz organ today. His drummer is Billy James, a sensitive and discreetly enthusiastic percussionist who always seems to contribute substantially to any musical effort in which he is involved. Vinnie Corrao is the guitarist. He is fleet without being facile, and he moves easily and effectively throughout the session.

Richard "Groove" Holmes is a powerful swinger whose propulsive effect upon a soloist can and does produce a singularly satisfying results. With him on the drums is Grady Tate, who consistently lays down a rhythm which is reassuring in its unobtrusive potency. The guitarist is Gene Edwards, a blues-saturated stalwart who may always be counted upon for stimulating moments during any set.

The music on the album represents a variety of moods, tempos, and textures. Cole Porter's You'd Be So Nice To Come Home To, taken at a mild uptempo, swings along buoyantly, retaining the lyrical quality with no trace of harshness or undue intensity. It is faintly tinctured with the blues nuances which appear again and again in so much of Eric's playing. Billy James drumming is outstanding on this track.

You'd Be So Nice To Come Home
Just For Fun-K
The Shadow Of Your Smile
No Blues
Love For Sale
I'm Glad There Is You
Gemini
Posted by By Mark Betcher at 5:46 PM