Jonah Jones At The Embers 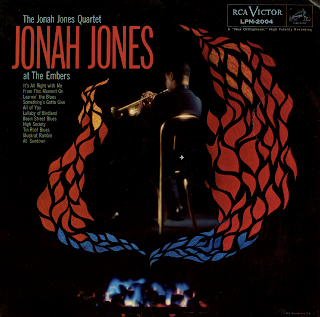 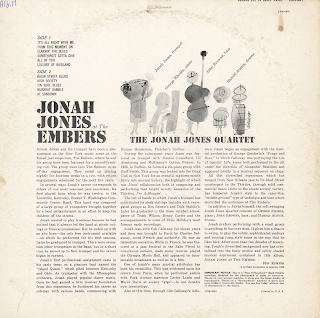 From the back cover: Jonah Jones and his trumpet have been a phenomenon on the New York music scene at the famed jazz emporium, The Embers, where he and his group have been featured for a record-breaking run. The group went into The Embers on an off-day engagement. They ended up playing nightly for fourteen weeks in a row, with return engagements scheduled for the next five years.

In several ways Jonah's career corresponds to others of our most seasoned jazz musicians. He first played horn when he was twelve, in the Louisville, Kentucky, Booker T. Washington Community Center Band. This band was composed of a large group of youngsters brought together by a local philanthropist in an effort to keep children off the streets.

Jonah wanted to play trombone because he had noticed that it always led the band at picnic outings or funeral processions. But he ended up with the alto horn – the only free instrument available – on which he performed for his first seasons. Later he graduated to trumpet. There were seventeen other trumpeters in the band, but in a short time he moved up to first trumpet and his career began in earnest.

Jonah's first professional assignment came in his early teens on a pleasure boat named the "Island Queen," which plied between Kentucky and Ohio. As trumpeter with the fifteen piece orchestra, Jonah played popular dance music. Once he had gained a firm musical foundation from this experience, he furthered his career as sideman with various bands, commencing with Horace Henderson, Fletcher's brother.

During the subsequent years Jones was featured on trumpet with Jimmie Lunceford, Lil Armstrong and McKinney's Cotton Pickers. In 1936, in Buffalo, he formed a six-piece group with Stuff Smith. This group was booked into the Onyx Club in New York for an eventful eight-month flurry into musical history, the highlight of which was Jones' collaboration both in composing and performing that bright novelty sensation of the Thirties, I'se A-Muggin'.

The list of bands to which Jonah's trumpet has contributed its sleek stylings includes such variegated groups as Ben Bernie's and Dick Stabile's. Later he graduated at the more rarefied atmosphere of Teddy Wilson, Benny Carter and the accompaniments to some of Billie Holiday's most famous early recordings.

Jonah was with Cab Calloway for eleven years and then was brought to Paris by Charles Delaunay, noted French jazz authority. He was an immediate sensation. While in France, he was featured at a jazz festival in the Salle Pleyel to tumultuous acclaim, made many records, played the Olympia Music Hall, and appeared on innumerable broadcasts as well as in film.

One of Jonah's many musical attributes has been his versatility. This was evidenced upon his return from Paris, when he performed awhile with Park Avenue maestros Lester Lanin and Meyer Davis at society "gigs" – to use Jonah's own terminology.

Also at this time, through Cab Calloway's influence, Jonah began an engagement with the musical production of George Gershwin's "Porgy and Bess," in which Calloway was portraying the role of Sportin' Life. Jones both performed in the pit under the direction of Alexander Smallens and appeared briefly in a musical sequence on stage.

All this diversified experience, which has ranged from New Orleans jazz to its 52nd Street counterpart in the Thirties, through solid commercial dance stints to the ersatz society variety, has tempered Jonah's style to the razor-fine, "middle-ground" type of technique and tone which electrified the audiences at The Embers.

Jonah prefers performing with a small group to anything he has ever done. It gives him a chance to swing, to play the subtle, sophisticated medleys and rousing jump style tunes in the way that he likes best. After more than two decades of seasoning, Jonah's diversified background now has crystallized into the finely mellow and subtly shaded musical expression contained in this album, Jonah Jones At The Embers – Bob Kemper

From Billboard - April 6, 1959: Jonah Jones' trumpet traces elaborate figures around such standard melodies as "Lullaby Of Birdland," "High Society" and "All Of You," to name a few. Quartet is bright and bouncy and highly inventive thruout. Jones adds new fans every day and this disk, cut when he started at the Embers in 1956 will enhance his reputation. For all lovers of small combo jazz.

It's All Right With Me
From This Moment On
Learnin' The Blues
Something's Gotta Give
All Of You
Lullaby Of Birdland
Basin Street Blues
High Society
Tin Roof Blues
Muskrat Ramble
At Sundown
Posted by By Mark Betcher at 6:41 PM