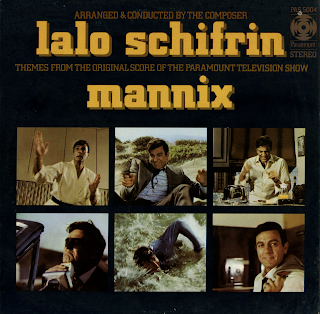 Available from online vendors so I will not be posting a sample. Presented here to share the cover and jacket notes excerpt.

From the back cover: I go through phases of hating television. However, watching the three record sessions which produced this album just brought me out of such a phase, for I realized that television, that vast and wonderful wasteland, is producing almost as much first-rate music these days as are motion pictures. Most of our finest composing talent functions in one or both fields.

Among the leaders is Argentine-born Lalo Schifrin (everyone pronounces it Schif-rin except Lalo, who says Schif-reen), a man of charming disposition, enormous talent and startling creative energies. Along with his TV music, Schifrin is also an active film score composer. His score for "Cool Hand Luke (Dot DLP 25833), the South American whirlwind not only wrote and arranged, but played the piano as well. Yes, but what has he done lately? It depends on which day you mean.

It was a sunny day when Schifrin met and hit it off with another young and hyper-active talent, TV producer Bruce Geller. Together they created the winning formula of Mission: Impossible from which came Schifin's now-famous 5/4 Mission theme, plus two successful albums, Mission: Impossible (Dot DLP 25831) and More Mission: Impossible (PAS 5002), Geller and Schifrin's most recent TV project is Mannix, from which this remarkable album comes, and once again the composer displays his penchant for making unlikely musical ideas work. Who else would have thought of using a waltz as a theme for a private detective? Anyone can tell you it doesn't make sense – until you watch the credits at the beginning of the show and find yourself caught up.

A curious and heartening thing occurs when two media are meshed with intelligence and skill; each stands as an entity. That's how it is with this album. I don't think anyone, even Lalo, knew how good it was until the end of the third date. While Schifrin is flatly the captain of this ship, he is surrounded by extraordinary able hands. Thus are all good albums made. Foremost is producer Tom Mack, himself a former arranger, a quiet man with a talent for seducing the best work out of people by putting them at their ease. And a word must be said about the musicians. Schifrin's arrangements are not easy; only the best players are used for his dates. Such is their ability that, even while running down a tune, there is little "rehearsing" involved. There is only the matter of reed players getting the feel of their parts in relation to brass, piano feeling what bass and drums are going to do, 35 or so individuals making the agile transition into a whole. Execution is all but instantaneous. Often the second or third run-through is a finished take. These are a special breed of people. At the end of a successful take, the feeling in the studio is one of mild elation, mutual pride. At the end of the album, the only word for the feeling is love. – Morgan Ames

Mannix
The Edge Of Night
The Girl Who Came In With The Tide
Beyond The Shadow Of Today
The Shadow
Turn Every Stone
Hunt Down
Warning: Live Blueberries
Fear
The End Of The Rainbow
End Game
Posted by By Mark Betcher at 4:09 PM