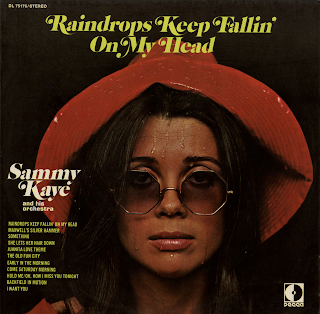 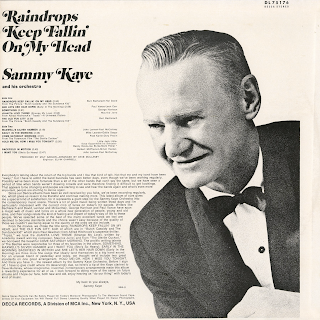 From the back cover: Everybody's talking about the return of the big bands and I like that kind of talk. Not that me and my band have been "away," but I have to admit the band business has seen better days, even though we've been working regularly. Possibly we've been more fortunate than a lot of the other bands that can't say the same, but we have seen a period of time when bands weren't drawing crowds and were therefore finding it difficult to get bookings. That appears to be changing and people are starting to see and hear the bands again and what's even more important, people are starting to dance again.

Since our Decca albums have been so well received by you folks, we've been recording regularly, too, which gives us a reason to be thankful and continue making more. This latest album of ours gives me a special kind of satisfaction, for it represents a giant step for the Sammy Kaye Orchestra into the contemporary music scene. There's a lot of good music being written these days and I'm particularly impressed with the current crop of tunes on today's hit parade. Writers like Bacharach and David, Lennon and McCartney, George Harrison and Paul Vance have spun a magic web of music and lyrics on a whole new generation of people, young and old alike, and their songs relate the kind of feeling and impact of today's way of life to these people. We've selected some of the best of the many excellent tunes we feel are destined to become standards and the choice wasn't easy because of the quality of those we couldn't use being equal to the quality of the ones we did include.

From the movies, we chose the title song, Raindrops Keep Fallin' On My Head, and The Old Fun City, both of which are in "Butch Cassidy and The Sundance Kid" which stars Paul Newman; from Alfred Hitchcock's suspense thriller, "Topaz," we took the Juanita Love Theme (Strange My Love), written by Academy Award winning composer, Maurice Jarre; and from "The Sterile Cuckoo," we burrowed the beautiful Come Saturday Morning. The prolific writing talents of The Beatles were responsible for three of my favorites in the album, Something, Maxwell's Silver Hammer and I Want You (She's So Heavy). Early In The Morning, Backfield In Motion and She Let's Her Hair Down (Early In The Morning) are three more fine songs and ideally lend themselves to a big band sound. For an unusual blend of yesterday and today, we thought we'd include two great standards on one great arrangement, Hold Me/Oh, How I Miss You Tonight. And there you have it... the newest album by the Sammy Kaye Orchestra. Before I sign off, I have to give credit where it's deservingly due, so here's a tip of the Kaye clarinet to Dave Mullaney, whose imaginative, inventive, contemporary arrangements made this album a rewarding experience for all of us. I look forward to doing more of the same on future albums and I hope our fans, both new and old, enjoy hearing un "do our thing" with today's kind of music. – My best to you always, Sammy Kaye

From Billboard - February 28, 1970: Dance bands have come and gone, but Sammy Kaye is still around, and sounding better than ever. He's right in today's groove with his topnotch arrangements of "Raindrops Keep Fallin' On My Head," "Early In The Morning and a medley that blends the oldies "Hold Me" and "Oh How I Miss You Tonight." For listening or dancing, this album will prove a must item for his many fans.

Raindrops Keep Fallin' On My Head
She Lets Her Hair Down
Something
Juanita Love Theme
That Old Fun City
Maxwell's Silver Hammer
Early In The Morning
Come Saturday Morning
Hold Me/On, How I Miss You Tonight
Backfield In Motion
I Want You
Posted by By Mark Betcher at 6:03 PM