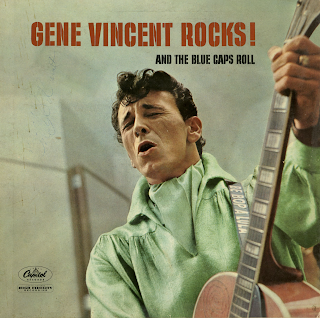 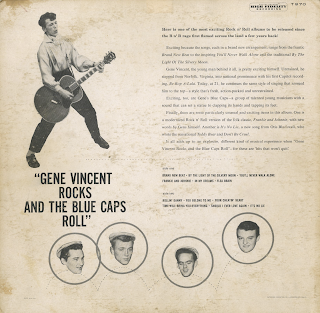 From the back cover: Exciting because the songs, each in a brand new arrangement, range from the frantic Brand New Beat to the inspiring You'll Never Walk Alone and the traditional By The Light Of The Silvery Moon.

Gene Vincent, the young man behind it all, is pretty exciting himself. Untrained, he stepped from Norfolk, Virginia, into national prominence with his first Capitol recording Be-Bop A-Lula. Today, at 21, he continues the same style of singing that zoomed him to the top – a style that's fresh, action-packed and unrestrained.

Exciting too, are Gene's Blue Caps – a group of talented young musicians with a sound that that can set a statue to clapping its hands and tapping its feet.

Finally, there are some particularly unusual and exciting in this album items in this album. One is a modernized Rock n' Roll version of the folk classic, Frankie And Johnnie, with new words by Gene himself. Another is It's No Lie, a new song from Otis Blackwell, who wrote the sensational Teddy Bear and Don't Be Cruel.

It all adde up to an explosive, different kind of musical experience when "Gene Vincent Rocks and The Blue Caps Roll" – for these are 'hits that won't quit."

From Billboard - March 17, 1958: Gene Vincent and the Blue Caps have a hot album here, one that could rack up healthy sales to teen-agers. There are new songs and oldies, ranging from the frantic, like "Brand New Beat," the the quieter , country styled efforts like "You'll Never Walk Alone" and "By The Light Of The Silvery Moon. Of the new items, "It's No Lie" could get action as a single. A strong new album for Vincent and his Blue Caps.

Brand New Beat
By The Light Of The Silvery Moon
You'll Never Walk Alone
Frankie And Johnnie
In My Dreams
Flea Brain
Time Will Bring You Everything
Should I Ever Love Again
It's No Lie
Posted by By Mark Betcher at 6:23 PM