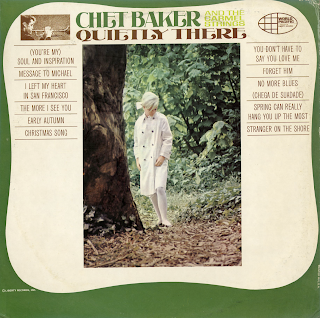 From the back cover: Chet Baker and strings always seem to this writer a natural – if not obvious – paring. The 36-year old Oklahoman is essentially a romantic on his instrument. And since he has forsaken trumpet for flugelhorn, the romantic turn of his musical approach has been that much further evident. The flugelhorn, with its roundness and fullness of tone, lends its character very well to a player with the time to rhapsodize. One recalls that Miles Davis (Chet Baker's stylistic ancestor) took to flugelhorn at a point in his career marking a departure from wholly small group settings and the beginning of adventures in music now considered historic.

So the romantic Chet has ample opportunity here to make the most of the arrangements of Harry Betts and Julian Lee, two of our leading craftsmen in the canny art of orchestration. If an arranger is really good, he can leave his personal mark on the treatment of a song just as indelibly as may a jazz improvisor. Both men are capable of this, and both do so here. Betts has been trombonist with many of the country's top name bands, from Charlie Barnet on through the alphabet. Lee is a gifted Australian who has been a Hollywood resident for several years. Both were assigned a half dozen tunes apiece to dress up for the Baker horn... what they did with them may be summed up in the words: Good Taste. – John Tynan

Early Autumn
I Left My Heart In San Francisco
Forget Him
Christmas Song
Quietly There
Spring Can Really Hang Up The Most
Stranger On The Shore
You Don't Have To Say You Love Me
The More I See You
No More Blues (Chega De Saudade)
Message To Michael
(You're My) Soul And Inspiration
Posted by By Mark Betcher at 7:13 PM