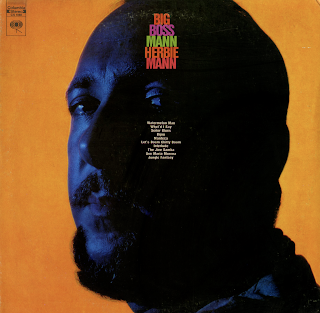 From the back cover: The flute is an instrument comparatively new to jazz. As recently as twenty years ago, it was hard to find anyone who could really play jazz flute. The situation is very different today. A studio sax man is expected to double on flute, alto flute, perhaps bass flute, and sometimes piccolo, oboe and English horn.

One of the men who did most to popularize the use of the flute in jazz was Herbie Mann.

On the other hand, flute has long been a staple of what we generally classify as "Latin" music. In Cuba, where most of the "mother rhythms" as they are called, of Latin music were developed, the wooden flute has been in use since a time predating musicological curiosity about it. Its uses in folk music, of course, go back long before the discovery of Cuba. Next to the drum, the flute is perhaps our oldest instrument.

Herbie Mann has been on of the great experimenters in mixing Latin music with jazz. The word "Latin" must be used advisedly, so rich and varied are the rhythms we call Latin. African musicians claim they can identify tribal sources in the rhythms they hear in the different Latin American countries, and even the basic jazz rhythm.

Jazz musicians have long shown a fascination with Latin American rhythms. Traces of Latin influence can be heard in jazz as far back as 1912. But in the early 1950s, the cross-pollination began to accelerate. Stan Kenton experimented with it. So did Dizzy Gillespie, who added a Cuban drummer named Luciano Gonzales, but better known as Chano Pozo, to his big band. And the Cuban composer-arranger Chico O'Farrill became an important figure in the movement with his writing for various bands, including both Kenton's and Gillespie's.

Herbie Mann formed his first Latin-influenced group in 1959, and has been at it ever since. It has, in fact, become his primary groove, though of late he has been incorporating rhythm and blues influences into his work. Herbie was one of the first to be caught by the subtle fascination of the modern Brazilian samba, and he went so far as to hie himself to Brazil to record at one point.

This album covers a board range of Herbie's Latin interests, and at the same time it shows how other American musicians have been influenced by it. All but two of the melodies were written by norte americano – Ave Maria Morena is a well known Cuban song, and Easy Morales wrote Jungle Fantasy. Manteca might be considered one-third Latin in origin: Chano Pozo wrote it in collaboration with Dizzy Gillespie and Gil Fuller. But Jive Samba is by Nat Adderley, Watermelon Man by pianist Herbie Hancock, Señor Blues by pianist Horace Silver, What'd I Say by Ray Charles. Pete Rugolo write Interlude for the Stan Kenton band, and Ralph Burns wrote Bijou for the Woody Herman band. Let's Boom Chitty Boom is by Herbie Mann.

Herbie has always used excellent sidemen, and this is true in this album. The arrangements are by the gifted Oliver Nelson, now emerging as an important film composer. The Latin percussion section includes some of the best men in the field in New York City. The soloists include pianist Which Corea, vibraharpist Dave Pike, tenor saxophonist Jimmy Heath, and trumpeter Carmell Jones.

A few years ago, musicians talked of Afro-Cuban jazz. But with a Brazilian influence now added to it, perhaps it should simply be known as Latin Jazz. And this album explores many facets of this lush and propulsive kind of music. – Gene Lees, Contributing Editor, High Fidelity

From Billboard - September 5, 1970: Mann shows another side of his musical character with this album, focusing on improvisation with a Latin rhythm with tunes such as "Señor Blues," "The Jive Samba," and "Manteca," while stylizing such standards as "Watermelon Man," and "What'd I Say." With a Latin percussion section and such notable soloists as Chick Corea on piano and saxophonist Jimmy Heath, Mann has a sound that will create some nostalgia and many new friends.