Snice I Fell In Love With You - Lenny Welch 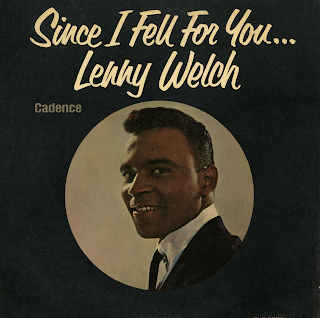 I'm In The Mood For Love
Since I Fell For You...
Lenny Welch
Orchestra Conducted by
Bert Keyes on You Can Have Her; Mama, Don't You Hit That Boy; Darlin
Chuck Sagle on It's Just Not That Easy
All other bands, orchestra conducted why Archie Bleyer
Cadence CLP 3068
1963

From the back cover: The usual show business story tells of years and years of struggle and hardship before the big break that leads to success. In actual fact, the history of show business is full of just such stories. Very few of the big stars became successful overnight; usually they worked their way up the ladder, learning their business the hard way – slowly and surely. But in these true stories there usually is a point that could be called the big break: a lucky meeting with the right person; just happening to be in the right place at the right time; or an usually good performance that just can't be ignored.

It looks as if Lenny Welch's career has finally reached the point of the big break and after the years of struggle and hardship, Archie Bleyer, president of Cadence Records, signed Lenny to a contract in November, 1959. Lenny's first record for Cadence was You Don't Know Me, which has already been a hit on records for Eddy Arnold and Jerry Vale. Don't You Know Me was moderately successful, and it looked as if Lenny was off to a good start in the record business. Quite a few bookings (a record artist's biggest source of income) resulted, including appearances with Chubby Checker in Ottawa, Canada, a date at the Apollo Theater in New York, and a one-nigher in Dallas, where You Don't Know Me had been a pretty big hit. But the next few records were unsuccessful, and gradually the bookings become less frequent; so did the phone calls from booking agencies.

But Archie Bleyer had faith in Lenny's talent and continued to make records. (It should be said that the usual practice in the record business is to "drop" an artist when his contract runs out if he doesn't turn out to be a profitable piece of "merchandise")

There was a slight relief from the generally discouraging state of affairs for Lenny with his recording of Changa Rock in April, 1961. Although it didn't sell in the continental United States, Changa Rock became the #1 record in the Commonwealth of Puerto Rico. Lenny became a celebrity in San Jaun in the summer of 1961 with a highly successful engagement at the Statler Hilton in San Jaun and numerous TV shows. And probably as a direct result of his success in Puerto Rico, Lenny got bookings in Caracas, Venezuela and Buenos Aires, Argentina. But except for these few bookings, he continued in the same discouraging routine of recording, then traveling without pay to promote records, meeting disc jockeys, visiting distributors and, of course, calling booking agencies. (Successful people in show business don't call agencies – the agencies call the artists' managers).

And so the trend continued – until August, 1963, when Lenny recorded Since I Fell For You. Recording engineers are usually pretty unimpressed with the artists and songs they record, but after the first take of Since I Fell For You, Capitol Studio's Frank Abbey greeted Lenny and arranger-conductor Archic Bleyer with open admiration as they walked into the control room to hear the take. And the record received the same reaction from the normally hard-headed record distributors and keenly critical disc jockeys. Since I Fell For You was a hit record, and Lenny Welch' big break had finally come.

From Billboard - December 12, 1963: Lenny follows a system used by a good number of the hit artists today. He uses the title of his current hit "Since I Fell For You" and then links up a great many hits and standards of other for a fine easy-paced set. "You Don't Know Me," "I'm In The Mood For Love" and "Are You Sincere" are some of the better tracks.

Since I Fell For You
A Taste Of Honey
Ebb Tide
You Can Have Her
I Need Someone
Mama, Don't You Hit That Boy
You Don't Know Me
Stanger In Paradise
Are You Sincere
It's Just Not That Easy
I'm In The Mood For Love
Darlin'
Posted by By Mark Betcher at 7:36 PM