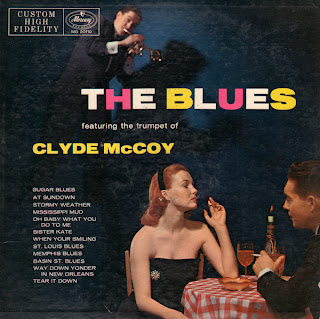 
Obscure album as I can't find another image of the cover online. McCoy isn't obscure however. He was a member of the McCoy family (Hatfield-McCoy). He co-founded Down Beat magazine and developed a signature "wah-wah" sound in the late 1920s that was replicated for the electric guitar with the introduction of the Vox Clyde McCoy Wah-Wah Pedal.

Read more about McCoy on his wiki page.

This album was reissued on Mercury's budget label, Wing and featured different cover art.
Posted by By Mark Betcher at 4:48 PM