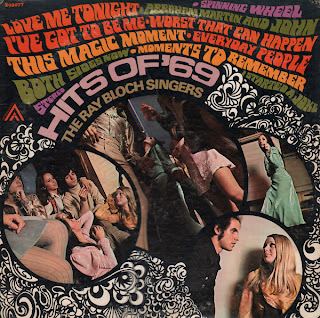 Today I feature another incredible Ray Bloch album. You might also want to check out the fantastic Bloch album I've posted titled Hair.

It's hard to describe to describe Ray Bloch's work so I'll let copy from the back cover do the work:

1969 was a super year... Everything that happened was smashing or stirring or shattering... The clothes were groovier, the dances wilder, and the parties were out of sight. A new president took office and a man actually stepped and jumped and danced on the moon... ON THE MOON. Through it all, around it and in it, was the music of the times. The hit songs of 1969 ran as wide a spectrum as the events of that banner year, and the hit songs collected by the Ray Bloch Singers in this album run the entire spectrum of the hits. The cream is here, and smoothly done.