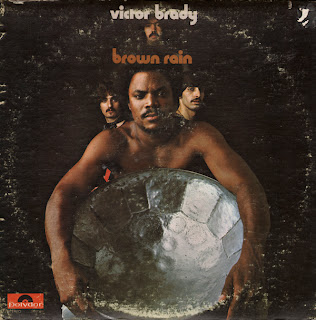 
As luck would have it, this album I found today, turns out to be a fairly rare or at least obscure psych album featuring steel drummer and vocalist Victor Brady. Listening to the record is like taking an Apocalypse Now Lysergic Acid Calypso Holiday.

Or, from the back cover: The sounds open up the sky you see. And Brown Rain falls down soaking the earth with shining metal hallucinodreams.

Once, many moons ago, the albums appears to have been released on CD. But today both vinyl and CD copies seem to be almost non-existant.

Crazy stuff!
Posted by By Mark Betcher at 8:19 AM