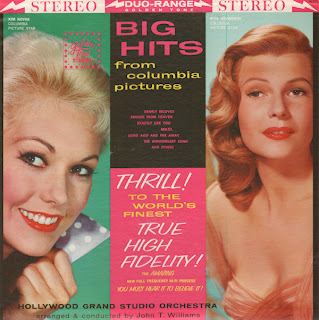 There are some cool tunes on the album. Williams scored soundtracks for a pile of well known films including Indiana Jones and the Kingdom of the Crystal Skull, Star Wars Episode III: Revenge of the Sun and a number of Harry Potter films.

I spent some time trying to link Novak, Hayworth and Williams with Brazil, the sample I've posted and or together somehow working on a film. In other words... how these three people and Columbia pictures all tie together... there is no clue on the jacket.
Posted by By Mark Betcher at 2:21 PM