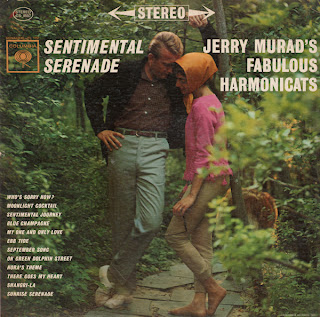 From Murad's wiki page: Jerry Murad's Harmonicats were an American harmonica-based group. Originally they were named The Harmonica Madcaps and the group consisted of Jerry Murad (chromatic lead harmonica), Bob Hadamik (bass harmonica), Pete Pedersen (chromatic), and Al Fiore, (chord harmonica). They reformed later as a trio with Murad, Fiore, and bass harmonica player Don Les. Pederson and Gail Wallace remained contributors to the group throughout its existence, working on arrangements and occasionally recording. Their 1947 recording of "Peg O' My Heart" (Mercury Records - originally Vitacoustic Records catalog number 1) brought them to public attention and sold over one million copies by 1950, reaching #1 on the U.S. Billboard chart.[1] Other charted hits included "Hair of Gold, Eyes of Blue," of which their version reached #22, and "Cherry Pink and Apple Blossom White".
Posted by By Mark Betcher at 5:07 PM