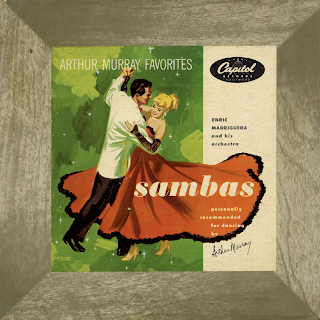 From Billboard - January 27, 1951: This is samba as played for the "society" clique in class clubs – lush strings and woodwinds. The tempos vary from selection to selection, with some just a little too slow for neophytes who may be Arthur Murray students. In all, tho, the clan who still consider the samba the number one Latin American dance will go for this collection. One side, "Come To The Mardi Gras" includes a vocal by an unidentified femme. Tune selection ranges from standards to the lesser known melodies.

Brazil
Juriti
Come To The Mardi Gras
Minute Samba
A Batucada Comecou
Tico Tico
One Night In Brazil
Saramba
Posted by By Mark Betcher at 8:30 PM