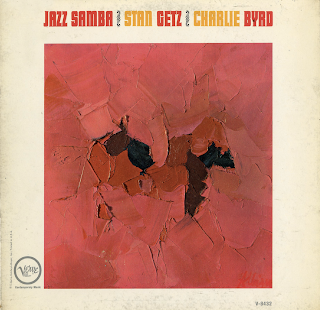 From the inside cover:

Since the late 1940s, when Stan Getz drew nation attention to his tenor sax with his lyrical solo on Woody Herman's Early Autumn, he has built an impressive career in jazz out of his gift for melodic improvisation. His sound is soft and warm, but takes on a firm edge on peppy tempos. The wide variety of jazz experience he has crammed into his 35 years includes work with the bands of Jimmy Dorsey, Benny Goodman, Stan Kenton, Woody Herman, Jack Teagarden, and Bob Chester, among others he has been leader of his own group since 1951, and has played in most of the leading cities of the world. He recently returned to this country after nearly three years of residence in Denmark. He has won scores of awards from jazz publications the world over, including in this country, Metronome's annual poll for 11 straight years, Down Beat's annual poll for 10 years, Playboy's annual poll for four consecutive years, and top awards in Down Beat's Critic's Poll. Melody Maker's Reader's Poll in Germany, and many others.

One of the few guitarists in jazz to use the unamplified instrument. Byrd hails from a family of guitarists. He was born, 36 years ago, in Suffolk Va., and grew up in a community with a large Negro population. His early exposure to music was to blues guitarists and singers, and to Negro gospel music. Byrd's father and three brothers played guitar, and Charlie followed in the tradition by starting on mandolin and guitar at the age of 10. While in the U. S. Army during World War II, he played guitar in a band, jammed with Django Reinhardt and was exposed to modern jazz in the mid-1940s, he worked with Freddie Slack, Joe Marsala, Barbara Carroll and Sol Yaged, among others. He settled in Washington to study with Sophocles Papas, widely-known guitar teacher. In 1954, an audition with Andres Segovia led to an invitation for Charlie to study with Segovia in Italy that Summer. He still lives in Washington and works there and in other top jazz locations with his trio.

About The Rhythm Section

Keter (William Thomas) Betts began as a drummer, but switched to bass after-graduating from high school in 1946. He worked with Earl Bostic, Dinah Washington, and Nat and Cannonball Adderley's group before settling in Washington and locating with Charlie Byrd's group. He is a native of Port Chester, NY, and is 33 years old.

Gene Byrd is Charlie's 24-year old brother, making his recording debut on this album. He was a senior at the Peabody Conservatory in Baltimore when the sides were recorded.

Two drummers were used because, as Byrd noted, "This is what the Brazilians do. Both drummers play simple patterns, and together they swing." Buddy (William H.) Deppenschmidt is 25 years old and played for Byrd for a year and a half. Although he left the group recently, he returned to make the album. He made the South American tour with Charlie and participated on Byrd's three recent albums. He is currently with Billy Butterfield. Bill Reichebach recently joined Byrd on drums. His experience includes work with Tommy Dorsey's band and as rhythm man with Georgia Gibbs, among others.