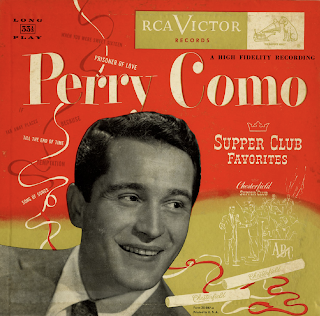 Temptation
Perry Como
Supper Club Favorites
RCA Victor LPM 3044 (10 inch 33 RPM)
1952
From the back cover: The great tunes gathered together on this disc are a souvenir of one of the most popular singing shows ever heard on radio – The Perry Como-Chesterfield "Supper Club." Signed by Chesterfield soon after his phenomenal rise to fame, Perry's been presiding over the thrice-weekly Chesterfield show (now seen as well as heard on TV), with his own inimitable brand of casual charm for over six years.
Perry's relaxed, easy-going way of doing anything is deceptive. He might even strike the casual observer as a lazy guy who doesn't get much accomplished. Actually, Perry works hard – just as he has since he was eleven. In addition to his TV shows for Chesterfield, he journey's regularly to Hollywood to make movies and has frequent date at RCA Victor recording studios to make records. And, in addition, there are all the time-consuming activities required of a prince of the entertainment kingdom – the conferences with managers, press agents and publicity men, personal appearances, charity shows and a dozen and one other demands on his time. One thing that keeps Perry young and healthy through it all is his relaxed, unhurried attitude. Another is the fact that his sometimes hectic public life is based on a regular domestic routine for Perry is devoted to his home and family.
His home is in a comfortable town on North Shore of Long Island, and his family consists of his wife, Roselle, sons Ronnie and David, and his daughter, Terri. Perry spends all his spare time with them. For relaxation, he likes golf, swimming, badminton, and fooling around with his notable collection of pipes.
His devotion to his family nearly cost him his career. When Ronnie was born, in 1940, Perry and Roselle were on the road with Ted Weems' band, with which Perry was featured vocalist, playing one-night stands around the country. Perry frankly hated the constant traveling; he'd been doing it for five years with Weems, and before that that for two years with Freddie Carolone's orchestra, with whom he had started out in 1933.
Perry stuck it out with Weems for two more years, more and more convinced it was no life for a baby. (Sometimes, he says, "we had to heat Ronnie's pablum on the car radiator.") When Weems broke up his band in December, 1942, to go into service, Perry went back to his native Cannonsburg, Pa., swearing he'd go back to his original trade of barbering before he'd go back on the road with a band. Determined to have a home life for his family, he refused several lucrative offers with name bands; but when he got a chance to have a sustaining radio show which would permit him to have a fairly permanent home he accepted and went to New York.
The rest, as the man said, is history. A two-week engagement at the Copacabana stretched out to eight; Hollywood beckoned imperiously; and RCA Victor hastened to sign him up. Within a year he was crowding Crosby, Sinatra and Haymes at the top of the ladder.
Prisoner Of Love with Russ Case and His Orchestra
Because
When You Were Sweet Sixteen with Lloyd Schaffer and His Orchestra
Far Away Places with Henri Rene and His Orchestra
Song Of Songs with Lloyd Shaffer and His Orchestra
Till The End Of Time with Russ Case and His Orchestra
Temptation with Ted Steele and His Orchestra
If with Mitchell Ayres and His Orchestra
Posted by By Mark Betcher at 6:58 PM