How Do You Like It? - Gerry And The Pacemakers 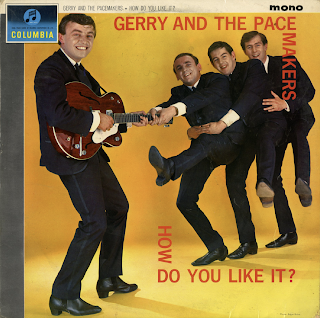 You'll Never Walk Alone
How Do You Like It?
Gerry And The Pacemakers
Photo: Edgar Brind
Columbia 33SX 1546
E.M.I. Records Limited
Made and Printed in Great Britain
1963


From the back cover: I hadn't heard Gerry's Pacemakers before their earliest trip to Germany but I do know that they returned to Merseyside with toughened voices and a tremendous new playing power. Gerry had put a thick leather coating on his tonsils and his lungs had turned themselves into a pair of steel-lined echo chambers.

The three founders of Les Chadwick – had been singing and playing together for twelve months before their first Hamburg season at the beginning of 1961. For a brief experimental spell Gerry fronted a trio instead of a quartet until pianist Les Maguire completed the current line-up by becoming a Pacemaker in May, 1961. The following winter Gerry And The Pacemakers made a permanent name for themselves on the since-famous Mersey Beat ballroom and club circuit. Liverpool fans found Gerry's good-humor, infectious grin and top-gear singing style irresistible. The solid sounds of The Pacemakers rang out at frequent intervals through the cells and tunnels of city centre basements like the Cavern Club and the Iron Door Club. The following summer, in June 1962, the group singed an exclusive management/direction contract with Brian Epstein. He brought them to the attention of E.M.I. producer George Martin some months later when George visited Liverpool to talk about plans for a first LP album by The Beatles. George watched Gerry And The Pacemakers in action during a routine appearance on the bandstand of a Birkenhead ballroom. He was sufficiently impressed to declare that normal recording studio audition should be scrubbed and a full-scale session date was fixed. The product of that session was a Columbia single which carried Gerry And The Pacemakers plus the Mitch Murray composition How Do You Do It? to Silver Disc fame at the No. 1 spot on the hit parade. A couple of months later Mitch penned another number specially for the group. Entitled I Like It this second ditty took Gerry And The Pacemakers straight back to the pop peal and established them as one of the major Merseyside influences upon 1963 pop scene trends.

A Shot Of Rhythm And Blues
Jambalaya
Where Have You Been?
Here's Hoping
Pretend
Maybellene
You'll Never Walk Alone
The Wrong Yo Yo
You're The Reason
Chills
You Can't Fool Me
Don't You Ever
Summertime
Slow Down