The Best Of The Browns 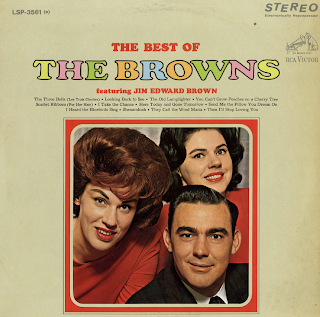 From the back cover: It was in 1959 that The Browns released on RCA Victor a record called The Three Bells (Les Trois Choches). It became one of the year's biggest hits and sold over a million copies for the trio from Arkansas – Jim Edward, Maxine and Bonnie Brown. Until that time The Browns were established country stars, but with The Three Bells they became pop headliners and yet remained favorites with their country fans, a feat many performers never accomplish. A true "family act," The Browns (brother Jim Edward, sisters Maxine and Bonnie) have a wonderfully warm voice blend that's distinctive, appealing, and a hallmark of all the "Bests" in this collection. – A&R Coordinator: Mike Lipskin

The Three Bells
You Can't Grow Peaches
The Old Lamplighter
I Heard The Bluebirds Sing
Scarlet Ribbons
Then I'll Stop Loving You
Send Me The Pillow
Here Today And Gone Tomorrow
Looking Back To See
Shenandoah
I Take The Chance
They Call The Wind Maria
Posted by By Mark Betcher at 6:07 PM