What Locks The Door - Jack Greene 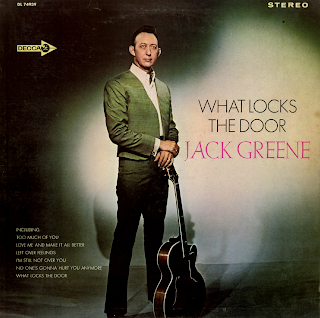 From the back cover: The year of 1967 will undoubtedly be inscribed in the annals of country music as the year in which a personable young man by the name of Jack Greene departed from his role as a featured member of the famed Ernest Tubb Texas Troubadours to strike out on his own as a solo performer. This latest album by him – titled, naturally enough, after his currently popular single record hit – offers further proof that he has already achieved an honored place among the great names in country music.

Though the Jack Greene story seems to be one of "overnight stardom," it is in fact a success story prefaced by hard and diligent work in his chosen career. The years 1944 through 1958 found this young man from Maryville, Tenn., active as a member in some of the top country music groups in the nation, including Atlanta's WSB-TV Peachtree Cowboys. Except for a short interruption from 1951-53, while he served as a member to the U.S. Army combat engineers, his fame throughout the land, as his popularity grew through his featured roles on local TV shows and 'in person' engagements.

It was not until 1962, however, and the chance to join the Ernest Tubb band, that the Jack Greene dream of success began to become a reality. During his years with this group, it was afforded the opportunity to record a series of Decca albums without its leader, and Jack got immediate attention with his great performance of a song penned by the late Rex Griffen titled The Last Letter, which went on to become the most programmed cut from the album and resulted in a Decca contract for him as a solo performer. He had moderate record success following The Last Letter until he recorded There Goes My Everything, which quickly shot up to the No. 1 spot on all the best-selling country music charts and was quickly followed by an album of the same title which achieved similar success. Jack's next record venture, soon after leaving the Tubb band, was an album and single titled All The Time – and the rest, as they say, is country music history.

Too Much Of You
Cincinnati, Ohio
Love Me And Make It All Better
My Elusive Dreams
Left Over Feelings
We'll Try A Little Bit Harder
I'm Still Not Over You
Gentle On My Mind
No One's Gonna Hurt You Anymore
Your Tender Loving Care
What Locks The Door
Posted by By Mark Betcher at 5:43 PM