Give Me Forty Acres! - The Willis Brothers 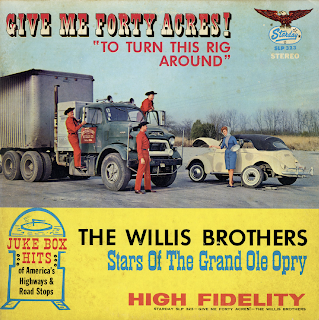 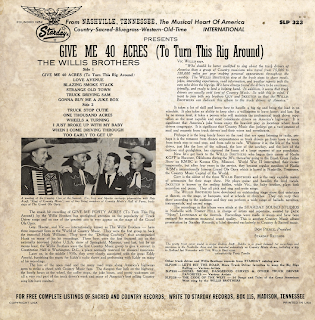 I Just Broke Up With My Baby
Give Me Forty Acres!
To Turn This Rig Around
The Willis Brothers
Starday Records SLP-323
1965

The pretty front cover model is singer Bobby Staff. Bobbie is in great demand for recordings and television in the Nashville Area and has traveled extensively on Country Music shows, including a trip to Holland last November with The Willis Brothers. - Color photo by Terry Tomlin

From the back cover: The smash hit recordings of Give Me Forty Acres (To Turn This Rig Around) by the Willis Brothers has spotlighted attention on the popularity of Truck Driver songs and on one of the greatest acts to ever appear on the stage of the Grand Ole Opry.

Guy, Skeeter and Vic – internationally known as The Willis Brothers – have three important first in the World Of Country Music. They were the first group to back the immortal Hank Williams. They were the "Drifting Cowboys" that accompanied Hank on many of his hit recordings. These boys were the first featured act on the nationally televised Jubilee U.S.A. show of Springfield, Missouri, and last, but by no means least, the Willis Brothers were the first Country Music group to give a concert in Constitution Hall in Washington, D.C., a place normally reserved for classical musicians.

Later on, in the middle 1950s, they were closely associated with the great Eddy Arnold, furnishing the music for Eddy's radio shows and performing with Eddy on many of his recordings.

The lure of the open road and the many road stops along America's highways seem to strike a chord with Country Music fans. The dangers that lurk on the highway, the lonely hours at the wheel, the coffee shops, the juke boxes, and pretty waitresses are all a very real part of truck driver's work and many of America's best selling Country song hits have resulted.

Vic Willis says: "Who should be better qualified to sing about the truck drivers of America than a group of Country musicians who traveled from 75,000 to 150,000 mile per year making personal appearances throughout the country. The Willis Brothers stop at the truck stops to share meals, jokes, interesting experiences, road information, and weather reports with the men who drive the big rigs. We have always found the drivers to be courteous, friendly and ready to lend a helping hand. In addition, it seems that truck drivers are usually avid fans of Country Music. So with this in mind, I want to join with my brothers Guy and Skeeter so that the Willis Brothers can dedicate this album to the truck drives of America."

It takes a lot of skill and know how to handle a big rig and bring the load in on schedule. It also takes an ability to keep alert; a willingness to leave home; and last, but by no means least, it takes a person who will maintain the professional truck driver reputation as the most capable and most considerate drivers on America's highways. It is significant that America's juke boxes enjoy the heaviest play in locations where truck drivers congregate. It is significant that Country Music disc jockeys get a vast amount of mail and requests from truck drivers and their wives and sweethearts.

Perhaps it is the long lonely hours on the road that are spent listening to radio, perhaps it is the romance from chance acquaintances as truck drivers go from town to town, from truck stop to road stop, from cafe to cafe. Whatever it is, the life of the truck driver, just like the lore of the railroad, the lot of the cowboy, and the lore of the outlaws and gunfighters, has captured the fancy of a large segment of our population.

Now let's get back to the Willis Brothers who began their career at Radio KGFF in Shawnee, Oklahoma during the 30's thereafter going to the Brush Creek Follies Show on KMBC at Kansas City, Missouri. World War II interrupted their career temporarily, but after four years in the service, they became regular members of Radio WSM's internationally famous Grand Ole Opry which is based in Nashville, Tennessee, the Country Music Capitol Of The World.

Guy is the oldest of the three Willis Brothers and is the very capable master of ceremonies for their stage show. He plays guitar and handles the lead vocals. Skeeter is known as the smiling fiddler, while Vic, the baby brother, plays both accordion and piano. They all pick and sing and write songs.

The Willis Brothers have developed an outstanding stage show that entertains at dances, on the stage, at banquets, and at schools or churches. They can vary their show according to the audience and they can perform a wide range of ballads, novelties, instrumentals and sacred songs.

The recordings in this album were made at the Starday Sound Studios in Nashville with Tommy Hall in charge of artists and repertoire, assisted by Jack "Hoss" Linneman at the controls. Recordings were made in stereo and have been remixed for maximum monaural sound quality. This is another Country Music album presentation by Starday Records, a label devoted exclusively to Country and Scared music. – Don Pierce, President - Starday Records