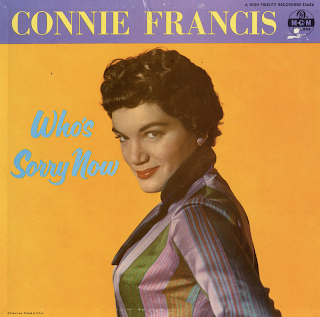 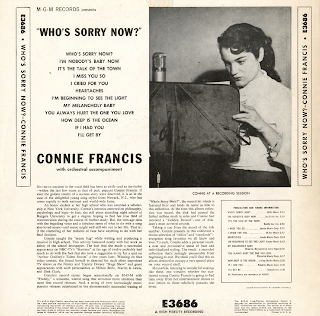 From the back cover: No rise to stardom in the vocal field has been so swift – and so inevitable – within the last few years as that of pert, piquant Connie Francis. If ever the golden results of a success story were deserved, it is so in the case of the delightful young song stylist from Newark, N. J., who has come rapidly to both national and world-wide fame.

An honor student at her high school who was awarded a scholarship at New York University, Connie's interests centered on philosophy, psychology and logic – in fact, she still plans attending night school at Rutgers University to get a degree, hoping to find her true field of concentration during the course of further study. But, the teen-age miss with the beguiling voice and a fabulous sense of what to do with a song also loved music – and music might well still win out in her life. That is: if the clamoring of millions of fans have anything to do with her final decision.

Connie caught the "music bug" while writing and producing a musical in high school. This activity balanced neatly with her work as editor of the school newspaper. The fact that she made a successful appearance on NBC-TV's "Startime" at the age of twelve probably had much to do with the fact that she took a suggestion to try for a spot on "Arthur Godfrey's Talent Scout" a few years later. Winning on the video contest, she found herself in demand for such other important TV shows as the Jimmy and Tommy Dorsey "Stage Show" and guest appearances with such personalities as Milton Berle, Martin & Lewis, and Dick Clark.

Connie's record career began sensationally on MGM with "Freddy," a winsome, wistful song that attracted more attention than most first record releases. And, a string of ever increasingly more-popular releasees culminated in her phenomenally successful waxing of "Who's Sorry Now?", the record hit which is featured here and lends its name as title to this collection. At the time this album collection was issued, the disk had passed the fabled million mark in sales and Connie had received a "Golden Record" – one of diskdom's most coveted awards.

Who's Sorry Now
I'm Nobody's Baby Now
It's The Talk Of The Town
I Miss You So
I Cried For You
Heartaches
I'm Beginning To See The Light
My Melancholy Baby
You Always Hurt The One You Love
How Deep Is The Ocean
If I Had You
I'll Get By
Posted by By Mark Betcher at 7:24 PM