Jazz From Then Till Now - Jackson, Napoleon & Sheen 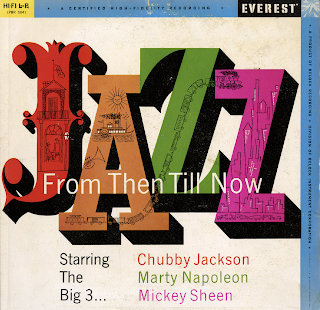 From the back cover: The music between these covers involves a new step on the part of Chubby Jackson as a recording artist as well as an innovation in the enlargement of Everest's jazz catalog.

Chubby's a jazz identification has always leaned to the side of progressive ideas and modern sounds, but he has been on the scene long enough to have observed at first hand all the styles that have been current since Fifty Second Street was in flower. Thus with the conception of the idea behind this album he was able to embody in two sides some authentic personal recollections covering several of the principal phases in the evolution of jazz.

"This was an idea that had been at the back of my mind for a long time," says Chubby. "The album was produced by the Big Three, and it was a big kick for us to show our pliability as a team by supplying the authentic rhythm section sound for each of the eras. Marty Napoleon, Mickey Sheen and I have been together as a unit for more than a year, and the group is well enough integrated to be able to handle any challenge that comes along."

Jazz From Then Till Now affords an opportunity to spotlight some comparative unknowns. Chub has been respected through the years not only for his own talent and enthusiasm but for his ability to spot potential stardom in others. Of Maria Marshall he says, "Here is one of the wildest young singers of all time! We heard her one night out at a Long Island club where we were working, and she absolutely pulverized that audience. As for Harry Sheppard, we think he's one of the swingin'est vibes men in the world, and it's a shame he hasn't been recorded much until now. And Ronnie Odrich is an amazing musician; he's been studying for a dentist's degree and at the same time developing a terrific talent on clarinet, saxes and flute. You'll hear a lot more about him.

"We first heard the Hubbell brothers and their group at a Dixieland concert on Long Island, and we were just amazed buy their fire and spirit in the Dixieland idiom. It's very impressive to find youngsters like this who can gas the college crowd with this kind of music – and the colleges have been become and important factor in supplying both the audiences and some of the talent for contemporary Dixieland." (The Hubbells, both from Brooklyn, are trumpeter Frank, 27 and clarinetist Paul, 23). For the perfect counterbalance, says Chubby, it was decided to bring in Pee-Wee Russell, one of the true originals of Dixieland jazz and a major recording figure since the 1920s.

In addition to contrasting newly-discovered talent and long-familiar jazz greats, the album is unique in that every segment is introduced blu one of the Big Three or by a musician speaking on behalf of the particular musical phase in which he is involved. Says Cubby, "This is the first time that anyone has been given posterity not only the instrumental sounds but the actual speaking voices, each one telling a little about his contribution to our story." – Leonard Feather

From Billboard - June 29, 1959: Here's an interesting and unusual new jazz set that covers the jazz scene from New Orleans to today's modern styles. A number of different jazzmen in addition to C. Jackson, M. Napoleon and M. Sheen, come thru solidly on the tracks, including Pee Wee Russell, C. Shavers, B. Brookmeyer and S. Yaged. Each of the different styles of jazz are introduced with a short spoken comment. And a new thrush, Maria Marshall, is featured on two bluesy tunes. Songs include "Struttin' With Some Barbecue," "Undecided" and Bernie's Tune."