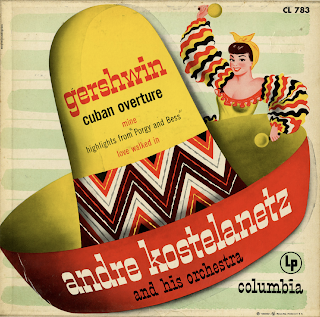 From Billboard - April 26, 1952 (ML-4481): The combination of Gershwin and Kostelanetz has always been a good one, and this is no exception. On one side is the first recording of the composer's "Cuban Overture." It's strange that this has never before been available because the music is brilliant. It was composed in 1932 after a brief vacation by Gershwin in Havana. The overture itself is in three parts. After an opening burst of dazzling color, the music slows in tempo portraying the spirit of a night in the tropics. The third section is a glorious rumba. The other side contains selections from three of Gershwin's musical scores, including the ever popular "Porgy And Bess." The performance of the Kostelanetz ork is up to its usual high standards. The disking will appeal to all who like Gershwin and the light classics.

Cuban Overture
Mine (from "Let Them Eat Cake")
Highlights from "Porgy And Bess:
Love Walked In (from "The Goldwyn Follies
Posted by By Mark Betcher at 8:09 PM