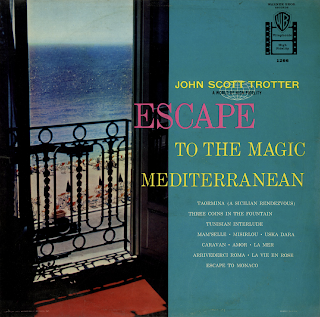 From Billboard - March 23, 1958: John Scott Trotter and his orchestra turn in a rich, lushly orchestrated job on this collection of sunny Mediterranean tunes. The selections include "Three Coins In The Fountain," "Arrivederci Roma," "La Vie En Rose," "Uska Dara," and "Mam'selle." On many of the tunes, exotic instruments such as crotales, boombam, and ceremonial bells are featured. Good use is made of stereo with a wide band separation. Lush, listenable Mediterranean music. Liner notes contain Italian and Greek recipes.