Love Among The Young - Jennie Smith 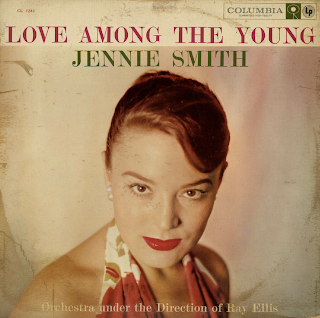 From the back cover: Only rarely do the sensitive young become articulate; a shyness of altogether winning proportions almost always overtakes them. But here, assisted by Ray Ellis' sympathetic arrangements and the music of such popular masters as Richard Rodgers, George Gershwin, Jerome Kern and Alec Wilder, among others, Jennie Smith offers a recital that is youthful, tender and fragrant with a special aura all its own. And certainly no more convincing spokesman could be found for the young than the enchanting Miss Smith, who herself has not yet attained voting age. Although her performances are primarily concerned with a dreamy kind of romance, she inserts sufficient spice along the way to remind her listeners that young people are not entirely moonstruck. The result? A charming program by a young star who is certain to become a major artist. Jennie developed her distinctive singing style through her years in grammar and high school in Charleston, West Virginia, determining when she was very young indeed to become a successful songstress. After graduation, she prevailed upon her family to let her try her luck in New York, and came to the big city full of hopes and plans. Her first job was not as a singer, however, but as a secretary in the offices of Look Magazine. Agreeable as her work was, her mind was on music, and at length she obtained an audition for Ray Ellis, her companion in this collection. He was struck at once by her remarkable grasp of musical values, and introduced her to manager Mike Stewart as the first step in her career.

The first product of that career was an album called Jennie, which met with unusual success for the debut of a (then) nineteen-year old singer. She was signed for appearances on the Steve Allen television program, was the subject of a picture story in Life Magazine, and went on to win further success in nightclubs around the country. Returning to recording, and reunited with discovered Ray Ellis, Jennie now offers a collection of twelve of her favorite songs. There will come a day, no doubt, when this album is a collectors' item, a souvenir of the early days of a notable career. Right now, however, it is at hand, presenting the inimitable performances of Jennie Smith who sings, brilliantly and memorably, of love among the young.

From Billboard - November 24, 1958: Young singer Jennie Smith, formerly on the RCA Victor label, bows auspiciously on Columbia with a warm new recording. She shows off not only a voice with feeling but an ability to interpret a song that many more experience singers would envy. She's accompanied in most satisfactory fashion by Ray Ellis ork. Tunes include the fine "Love Among The Young," "A Very Special Love," "Young And Foolish," "A Very Special Love," "Young And Foolish," and "While We're Young."

Love Among The Young
Impossible
A Very Special Love
While We're Young
Young And Foolish
Take Me In You Arms
Cross Your Heart
A Fine Romance
Teacher, Teacher
'S Wonderful
There Will Never Be Another You
All I Do Is Dream Of You
Posted by By Mark Betcher at 4:47 PM