Songs Of The Island - Marty Robins 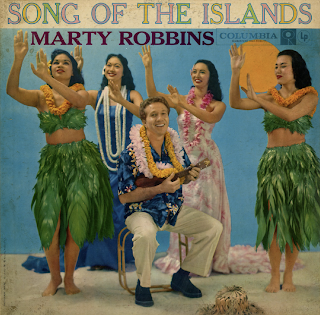 From the back cover: Marty was born on a farm near Glendale, Arizona, and went to school in Phoenix, where his family moved when he was twelve. He joined the Navy in 1943, and spent most of the war in the Pacific, where he learned to sing – and to love – many of the songs he offers here. On those islands, he found himself lonesome for the familiar sound of the music he had grown up with, and spent much of his free time playing the guitar, rehearsing the old numbers and picking out the new ones. It was a spare time occupation for him – he had no idea of becoming a singer at that time, and after his discharged, he went to work at many different jobs. Nevertheless, all during that time he still kept playing and singing, and wrote many of the songs himself.

One night he went to see a friend who was appearing at a nightclub, and asked if he could try his hand at public performance. The friend agreed, and, with a borrowed guitar, Marty made his debut. The next day his friend, Frankie Starr, gave him a new guitar, an amplifier, and a job with his group. Soon thereafter Marty signed to record for Columbia Records, and in 1953 he became a member of the famous Grand Ole Opry. From that time forward, his career moved steadily ahead, and with Singing The Blues he emerged as a major star not only in country music but popular music as well, following up with A White Sport Coat and The Story Of My Life, Marty has appeared in movies and television too, and is one of the most sought-after entertainers in the country.

From Billboard - March 3, 1958: Connoisseurs of island melodies have long known that Robbins is a master of this material. Frankly, this package is outstanding. Marty Robbins' performances indicate his craftsmanship, fine phrasing and delivery. Songs include "Sweet Leilani," "My Isle Of Golden Dreams," "Aloha Oe," etc. Robbins' fans will be satisfied and new listeners will be delighted.

Song Of The Islands
Don't Sing Aloha When I Go
Beyond The Reef
Crying Steel Guitar Waltz
My Isle Of Golden Dreams
Now Is The Hour
Sweet Leilani
Down Where The Trade Winds Blow
Constancy
Island Echoes
Moonland
Aloha Oe
Posted by By Mark Betcher at 6:32 PM