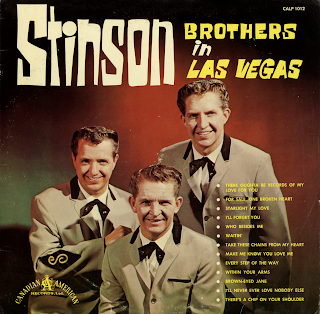 From the back cover: Who's Who Among The Stinson Brothers

Bob, Ray and Ronnie are the three oldest boy in a family of six boys and three girls, born in Decator, Alabama

The family moved to Cleveland when the boys were quite young and they spent most of their school years there.

Later they chose Minnesota as their home.

They have appeared all over the USA, in Canada and Hawaii. (Where they recently headlined the East West show, representing the United States, in the Japanese American Revue, in Honolulu.)

There Ought To Be Records Of My Love For You
For Sale, One Broken Heart
Starlight My Love
I'll Forget You
Who Besides Me
Waitin'
Take These Chains From My Heart
Make Me Know You Love Me
Every Step Of The Way
Within Your Arms
Brown-Eye Jane
I'll Never Ever Love Nobody Else
There's A Chip On Your Shoulder